It was a cold day for Georgia. Temperature was 23 degrees with a wind chill of 17 at the trailhead. Ice puddles, frozen streams, and frozen mud flows on the trail did not melt all day.

This was my third visit to the area. On the first trip, I scouted trailheads. For the second trip, I was stopped by Stanley creek. The dirt road fords Stanley Creek, and the crossing is about 15 feet wide and 10-12 inches deep. I was unable to find a dry crossing, after scouting upstream and downstream for over an hour. Since it was February, I was unwilling to wade.

This time I went with some very cool, lightweight hip-waders, weighing about a pound. Crossed Stanley Creek in 5 minutes.

Later, I encountered another creek and managed to cross it dry. As I was breathing a sigh of relief, I stepped on a sheet of ice and landed hard. Fortunately, the only wounds were to my pride and a big bruise on my hip.

It was a long, but not particularly difficult hike to Horsepen Gap. From there, it was 0.7 miles bushwhacking up the ridge to the summit. The first half of this bushwhack is steep and was a bear. The second half was not too bad. It is obvious when you reach the general area of the summit, but it is a broad and not sharply defined.

I literally tripped over the benchmark for the summit! 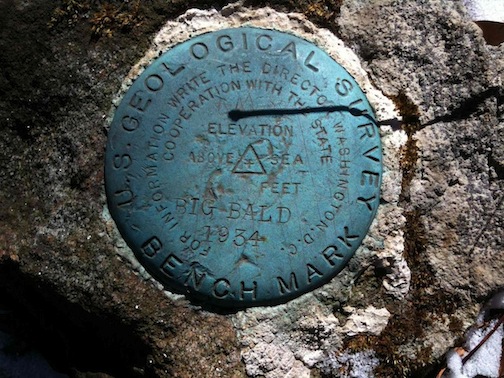 I had a tough time reaching chasers. I don’t know why. I used the same antenna and it was hung very similar to my successful summit last week. Both times, I used a 30 foot, end-fed, with a 9-to-1 UNUN, and a 33 foot, ground-level counterpoise. The antenna was almost vertical (with about a 15 degree slope, and the base of the antenna 2-3 feet off the ground. I’m not certain, but I might see a pattern of more chasers on Saturdays than on Sundays, or it could have been that many chasers were participating in the big CW contest today, or it could just have been a fluke of propagation.

This was an exhausting summit, due to the long bushwhack, and 7 miles round-trip is near the limit of my endurance on a winter day. I am particularly grateful to the chasers who found me, because I’d have HATED hiking all that distance for naught!